Rosario is today known as “Cradle of the flag” as in this place was raised for the first time the national flag, at the behest of its creator General Manuel Belgrano. If you want to know the history of the emblematic site of Rosario and symbol of all Argentines we share you this post with all the useful information about the guided tours.

Guided tours through the National Monument to the Flag

The National Historical Monument to the Flag stands at the site where General Manuel Belgrano raised for the first time the national flag, on 27 February 1812. Erected as the first trial in Latin America of the revival of monumental architecture, the monument was built in 1943 and was inaugurated on June 20, 1957. This work by the architect and engineer Ángel Guido was built in travertine mármol, original of the province of San Juan and occupies an area of 10,000 m2.

The building can be divided into 3 main sections: the Central Tower, which rises a large sculptural group by artists Bigatti and Fioravanti; the Propylaeum (altar where it pays tribute to the dead by Homeland) and the civic courtyard that unites both architectural bodies. Also it stands out the Honor Gallery of the flags of America.

The civic courtyard is the place chosen to perform shows for the public in the open air, as recitals and concerts. To complete this beautiful scene, across is located the Paraná  River. The panoramic view of the river and city from the viewpoints of the monument are really worth.

The National Monument to the Flag is also headquarters of the celebrations for the flag day, with a ceremony and mass parade each June 20, attended by hundreds of local and tourists. 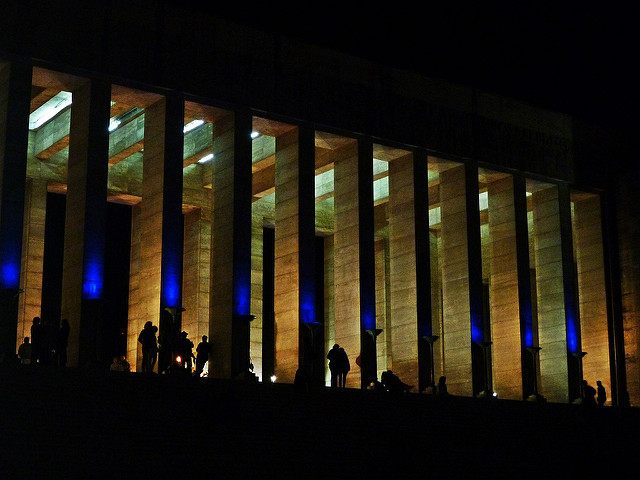